Pick Your Own Christmas Tree.org 2022

Find a choose and cut tree farm or fresh pre-cut trees near you! 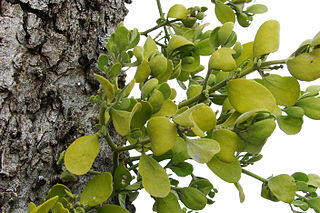 Are you looking for mistletoe for the holidays? Whether you wants some for an office party (or you need it because otherwise, even your own dog won't kiss you) you can easily pick your own mistletoe in 10 minutes time! It grows commonly in many trees in most areas of North America and Europe. We'll explain how to recognize it, what it is, and how to collect it!

Mistletoe is commonly used as a Christmas decoration in English-speaking countries, though such use was rarely alluded to until the 18th century. Mistletoe, because it stayed green all winter, and produced white berries when m 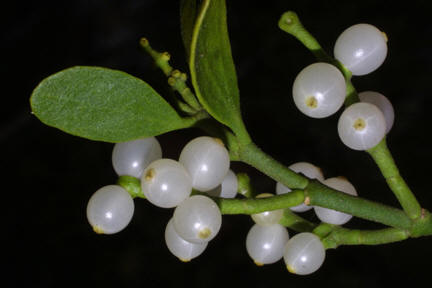 ost plants were dead or domant, was thought by ancient Celts to have magic properties. According to ancient Christmas custom, a man and a woman who meet under a hanging of mistletoe were obliged to kiss. The custom may be of Scandinavian origin. It was described in 1820 by American author Washington Irving in his "The Sketch Book of Geoffrey Crayon": "The mistletoe is still hung up in farm-houses and kitchens at Christmas, and the young men have the privilege of kissing the girls under it, plucking each time a berry from the bush. When the berries are all plucked the privilege ceases." See also "The Holly and the Ivy ".

Also, according to custom, the mistletoe must not touch the ground between its cutting and its removal as the last of Christmas greens at Candlemas; it may remain hanging through the year, often to preserve the house from lightning or fire, until it was replaced the following Christmas Eve. The tradition has spread throughout the English-speaking world but is largely unknown in the rest of Europe. 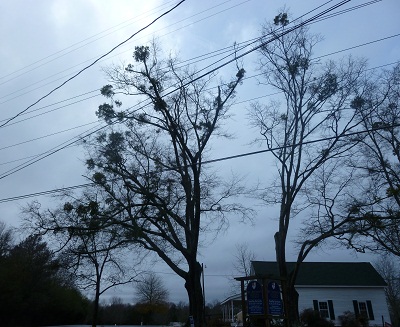 Where to find mistletoe

Mistletoe plants grow on a wide range of host trees. Obviously, it doesn't grow in pine trees, but rather deciduous (trees that lose their leaves in the winter) instead. Since mistletoe stays green all year round, it is pretty easy to spot in trees, once the leaves have fallen. Just look for green, round clumps in the trees. The clumps typically range from 1 to 1.5 feet across. See the photo at right. Notice the many round clumps in both trees. A tree may have only one clump or many (or, of course, none).

While Druids looked for mistletoe in oak trees, given their height, you will find it easier to look for it in younger smaller trees., where it will be closer to the ground.

How to recognize mistletoe 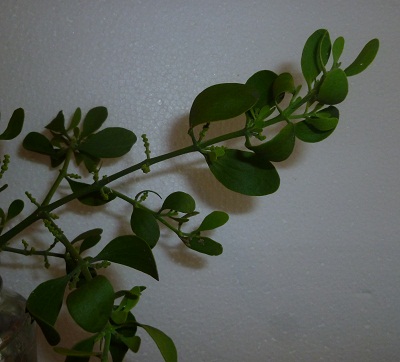 Once you spot w green roundish clump in an otherwise dormant tree, such as an oak, look for oval, green, smooth leaves, and small white berries. Althought there may be no berries, merely small green bumps in December. The berries usually don't fill out until January or February.

How to collect or "pick your own" mistletoe

The easaiest way to harvest mistletoe is to find a clump that is low in a tree, as close to the ground as possible, and use a pole-pruning tool like the one shown in the photo at right, to cut the mistletoe from the tree, where it attaches to the tree. The mistletoe stem is rather soft, though woody, and rarely mor than a half inch (1 cm) in diameter.

Mistletoe, although a parasitic plant is still a green plant that uses photosynthesis. S,o stick the cut end of the stem in a jar of cool water and keep in in a cool place (outdoors, usually) until you are ready to use it. Once you hang it, it will, of course, start to try out, but that is part of the custom, anyway!

Viscum album can parasitize more than 200 tree and shrub species. All mistletoes are hemi-parasites, bearing evergreen leaves that do some photosynthesis, and using the host mainly for water and mineral nutrients. However, the mistletoe first sprouts from bird feces on the trunk of the tree and in its early stages of life it takes nutrients from this source. Species more or less completely parasitic include the leafless quintral, Tristerix aphyllus, which lives deep inside the sugar-transporting tissue of a spiny cactus, appearing only to show its tubular red flowers, and the genus Arceuthobium (dwarf mistletoe; Santalaceae) which has reduced photosynthesis; as an adult, it manufactures only a small proportion of the sugars it needs from its own photosynthesis but as a seedling it actively photosynthesizes until a connection to the host is established.

The ancient Druids held Mistletoe in high regard, considering it scared. Mistletoe was used by the Druid priesthood in a ceremony held five days after the New Moon that followed the winter solstice (December 21). The Druid priests would cut Mistletoe from a holy Oak tree with a golden sickle. The branches had to be caught before they touched the ground. The priest then divided the branches into sprigs and dispersed them to the people, who hung them over doorways as protection. The folklore, and the magickal powers of this plant, have blossomed over time, although most are now forgotten. It was believed it had miraculous properties that could cure illnesses, antidote poisons, ensure fertility and protect against witchcraft. It was also a sign of peace and goodwill. When warring tribes came across Mistletoe, a temporary truce would be observed until the next day.

It is considered that Mistletoe and kissing tradition is borne of a Norse myth. Click for an explanation of the myth.

The Holly and the Ivy (song)

The holly and the ivy
When they are both full grown
Of all the trees that are in the wood
The holly bears the crown.

Chorus:
Oh, the rising of the sun
And the running of the deer
The shining of the winter stars
As the longer days draw near.

The holly bears a blossom
As white as any flower
As our Mother bears the infant Sun
In the winter's darkest hour.

The holly bears a berry
As red as any blood
As our Father bears the hunter's spear
for His hungry children's good.

The holly bears a prickle
As sharp as any thorn
As we shall bear our song of hope
On triumphant Yuletide morn.

Want to make your own homemade Gingerbread House or Gingerbread men cookie s? They're both easy with these completely illustrated directions!