Pick Your Own Christmas Tree.org - 2020 Find a choose and cut tree farm or fresh pre-cut trees near you!

Looking for the right tree, but don't know which variety is right for you? This guide will help you decide which Christmas Tree species or types sold and grown in the United States is worth the price and has the properties you want.  Click on the links below for more information about each type.  The links for photos and more info open new windows, so just close them to return to this page. Click here for the guide to UK Christmas tree varieties . 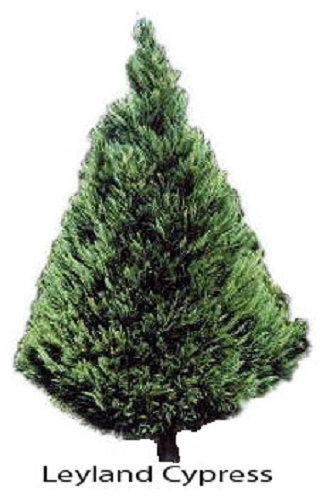 Thanks to growing well in the heat (unlike firs) Cypress are the most commonly growth Christmas tree in the deep South.  Their needles are soft to the touch, but the branches aim upwards, rather than straight out, and are not great at holding heave ornaments. 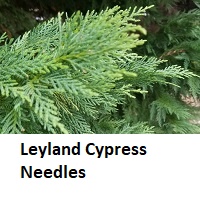 is dark green to gray color; has upright branches with a feathery appearance; has a light scent; good for people with allergies to other Christmas tree types. The most popular Christmas tree in the South-East, the Leyland Cypress is dark green - gray in color and has very little aroma. The needles are soft and won't hurt even a toddler. Because it is not in the Pine or Fir family, it does not produce sap, so that those with an allergy to sap can still enjoy a Leyland as their Christmas Tree. If you live in very warm climates, like the Deep South, the Leyland may be your only choice if you want to cut your own tree.  More info .    (Photo credit to The National Christmas Tree Association)

Fir trees are the traditional Christms tree for most Americans because they have the key qualitities: great fragrance, short sturdy needles and branches and good needle retention. If keep watered and not in a hot room, they'll hold their needles up to Christmas.

Balsam Fir - Photo -  3/4" to 1 and 1/2" short, flat, long lasting needles that are rounded at the tip; nice, dark green color with silvery cast and fragrant. These needles are 3/4 - 1 and 1/2 in. in length and last a very long time. This is the traditional Christmas tree that most Americans grew up with. This tree has a dark-green appearance and retains its pleasing fragrance throughout the Christmas season.  Named for the balsam or resin found in blisters on bark. Resin is used to make microscope slides and was sold like chewing gum; used to treat wounds in Civil War. 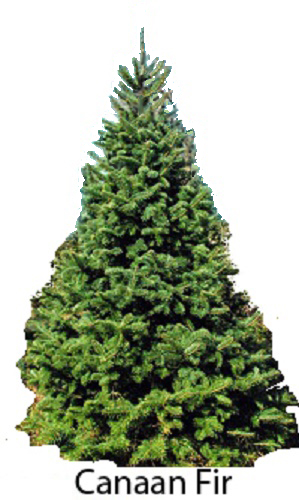 Canaan Fir - Photo - Similar to the other eastern firs.Canaan Fir has short, soft needles that are dark green on the upper surface and silvery blue on the underside. It combines the strong fragrance of the Balsam Fir with the better needle retention of the Fraser Fir. It is  native to isolated pockets in the mountains of West Virginia and Virginia, but is commercially grown in many areas of the east Coast. 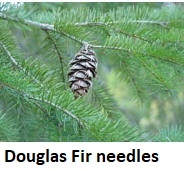 e to dark green; 1" to 1 and 1/2" needles; needles have one of the best aromas among Christmas 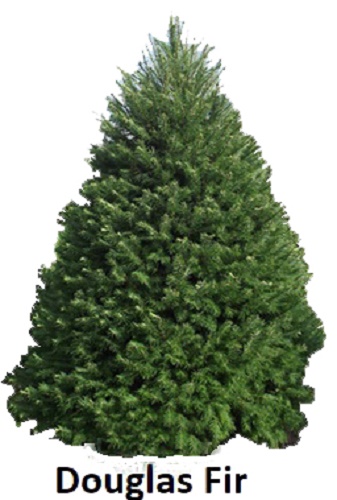 trees when crushed. The Douglas fir needles radiate in all directions from the branch. When crushed, these needles have a sweet fragrance. They are one of the top major Christmas tree species in the U.S. Named after David Douglas who studied the tree in the 1800's; good conical shape; can live for a thousand years. 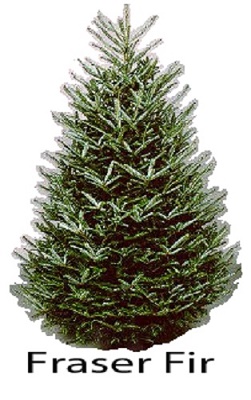 Fraser Fir - Photo - dark green, flattened needles; 1/2 to 1 inch long, dark green on the top and silvery underneath; good needle retention; nice scent; pyramid-shaped strong branches which turn upward. The Fraser fir branches turn slightly upward. They have good form and needle-retention. They are dark blue-green in color. They have a pleasant scent, and excellent shipping characteristics as well. Named for a botanist, John Fraser, who explored the southern Appalachians in the late 1700's.

Grand Fir - Photo   - shiny, dark green needles about 1" - 1 and 1/2" long; the needles when crushed, give off a citrusy smell. Commonly grows only on the Pacific northwest coast. It is related to the white fir, and is also called the great silver fir, western white fir, Vancouver fir, or Oregon fir. It mostly grows at altitudes from sea level to 1,800 m.

Noble Fir - Photo - one inch long, bluish-green needles with a silvery appearance; has short, stiff branches; great for heavier ornaments; keeps well. These needles turn upward, exposing the lower branches. It's extremely aromatic, and while it is native to the West Coast, it is gaining popularity throughout the U.S. It's shape is similar to a Douglas fir but with a deeper, richer green. Known for its beauty, the noble fir has a long keep ability, and its stiff branches make it a good tree for heavy ornaments, as well as providing excellent greenery for wreaths and garland.  Nobles are native to the Pacific northwest coast; the Siskiyou Mountains of northern California and the Cascade and Coastal ranges of Oregon and Washington. It closely resembles the California red fir 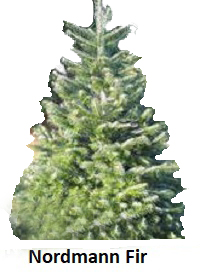 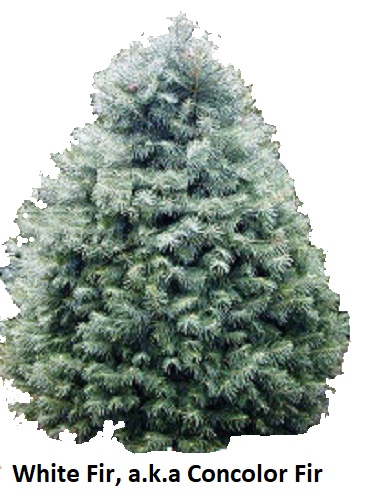 , similar to a Fraser fir, but soft to the touch and with excellent needle retention.  Nordmann Fir Christmas Trees can reach 60 feet in height with a spread of 25 to 30 feet. Their soft and lustrous black-green needles stem from symmetrically arranged branches, producing the ideal pyramidal specimen for a Christmas tree. Nordmann Firs are also popular as ornamental trees in parks and gardens. This tree is very popular in Great Britain. Wikipedia has more information and does this grower's website.
See the photo at right. 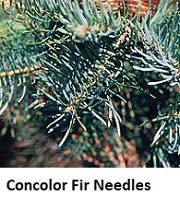 White Fir or Concolor Fir - Photo - blue-green needles, with a whitish tint,  are 1/2 to 1/2 inches long; nice shape and good aroma, a citrus scent; good needle retention. They have good foliage color, good needle retention, and a pleasing shape and aroma.  In nature can live to 350 years. Photo credit to The National Christmas Tree Association

Pines are a good compromise between firs and cypress: they look and smell more like a traditional Christmas tree, are easily pruned to a good shape in the field and grow well in the warmer climates. But they can produce a lot of sap. 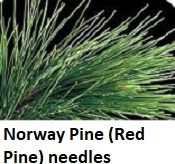 Norway Pine - The Norway Pine, Also called the Red Pine is Minnesota's State tree. It has dark green needles, 3"-5" in length, big and bushy. The branches are strong and hold decorations well and has very good needle retention.  native to North America. It occurs from Newfoundland west to Manitoba, and south to Pennsylvania, with several smaller, disjunct populations occurring in the Appalachian Mountains in Virginia and West Virginia, as well as a few small pockets in extreme northern New Jersey and northern Illinois.Close up photo of tree . 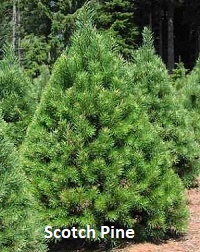 Scotch Pine - Photo - most common Christmas tree; stiff branches; stiff, dark green needles one inch long; holds needles for four weeks; needles will stay on even when dry; has open appearance and more room for ornaments; keeps aroma throughout the season; introduced into United States by European settlers. The color is a bright green. The most common Christmas tree in the U.S., the scotch pine has an excellent survival rate, is easy to replant, has great keepability and will remain fresh throughout the holiday season. See photo at right and click here for a close-up photo of tree .

Virginia Pine - dark green needles are 1 and 1/2" - 3" long in twisted pairs; strong branches enabling it to hold heavy ornaments; strong aromatic pine scent; a popular southern Christmas tree. These branches are stout and woody and respond very well to trimming. It is small- medium in size and its foliage becomes extremely dense. Aside from being a good nesting site for woodpeckers, the Virginia pine continues to be the most popular Christmas tree in the South.      More info .

White Pine - Photo - soft, blue-green needles, 2 to 5 inches long in bundles of five; retains needles throughout the holiday season; very full appearance; little or no fragrance; less allergic reactions as compared to more fragrant trees. The largest pine in the U.S., the White Pine has soft, flexible needles and is bluish-green in color. Needles are 2 and 1/2 - 5 in. long. White Pine's have good needle retention, but have little aroma. They are the state tree of Michigan & Maine; slender branches will support fewer and smaller decorations as compared to Scotch pine. They aren't recommended for heavy ornaments.  It's wood is used in cabinets, interior finish and carving. Native Americans used the inner bark as food. Early colonists used the inner bark to make cough medicine.    Close-up photo of tree . 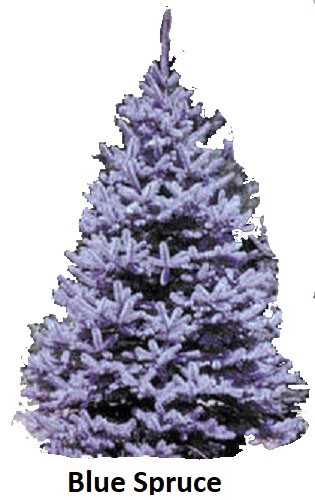 Spruce are generally more like the firs in appearance, with short, stiff needles and branches that hold ornaments well. Blue and White Spuce have a particularly beautiful color. 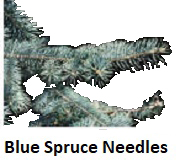 pungens - dark green to powdery blue; very stiff needles, 3/4" to 1 and 1/2" long; good form; will drop needles in a warm room; symmetrical; but is best among species for needle retention; branches are stiff and will support many heavy decorations. State tree of Utah & Colorado. Can live in nature 600-800 years.  The needles really do have a bluish look to them, as shown in the photo at right.  More info.

Colorado Blue Spruce - Photo - Often used for stuffing pine-pillows, these sharp needles are 1 - 1 and 1/2 in. in length. This species is bluish-gray in color and has a bad odor when needles are crushed. This Christmas Tree has good symmetrical form and has an attractive blue foliage. It also has good needle retention. 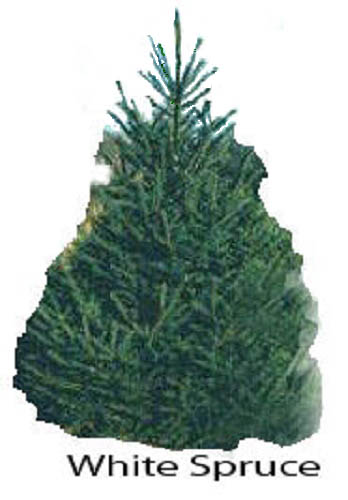 White Spruce - Photo - needles 1/2 to 3/4 inch long; green to bluish-green, short, stiff needles; crushed needles have an unpleasant odor; good needle retention. State tree of South Dakota. The White Spruce is excellent for ornaments; it's short, stiff needles are 1/2 - 3/4 in. long and have a blunt tip. They are bluish-green - green in color, but have a bad aroma when needles are crushed. They have excellent foliage color and have a good, natural shape. The needle retention is better in a White Spruce than it is among other spruces.   Photo credit to The National Christmas Tree Association 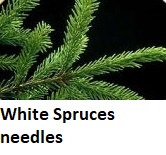